The worm farm workshop we had on Saturday 28 August was a great success, especially in terms of the stuff we learned about worms.

Did you know you could feed worms your old work boots if you remove the rubber and elastic? They will eat them.

Did you know you could feed worms snakes and toads? They will eat them – all except the poison sacks.

Did you know you could feed your worms dog poo? They will eat it – if you age it for 21 days after you have wormed your dog.

Did you know they love grass clippings? They will eat them and love you for it.

We learned so much more than these four things from Bill. He constructed a worm farm for the garden, explaining everything as he went. The timber came from Mary Valley Timbers.

He showed us how to get the worm juice into a bucket – this one is in the ground and needed a fair bit of digging to get it in.

Finished off by filling with cow manure and worms, and topping it off with a piece of carpet one of our neighbours donated to the garden.

A few days later there were a couple of the worms wriggling on the surface. 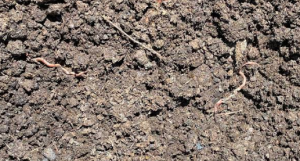 Around 21 days from now, the worms will have met each other, reproduced and their eggs will have hatched.

Did you know worms can double their population in six to eight weeks?

Did you know that by spending around ten minutes a week on composting and worm farms you can reduce your rubbish output by up to 50 percent!